Postitial gives brands two powerful options for building striking branding campaigns: full-screen and sponsorship. Postitial ads are only displayed when a user ends an app session. Displaying an ad when a user is leaving an app generates higher levels of awareness and engagement. This placement respects the user journey by displaying only once the user has finished interacting with the app. Users are also more receptive to advertising as they are between tasks and not mid-way through an activity. One of the downsides of ads in apps is that they navigate users out of the app and that’s not good news for developers trying to keep users. 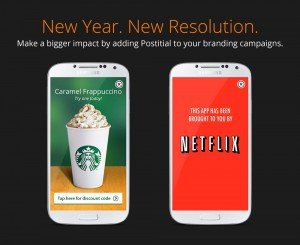 Postitial supports all full-screen options: static full-screen ads, rich media and all video ad types. Agencies and brands can now build striking and high impact full-screen creatives that appear when users end an app session. Both advertiser and publisher data have shown that Postitial generates on average higher CTRs than interstitial ads for the same app. That data point proves that there’s a higher level of user engagement with Postitial than any other ad space in an application.

The alternative to running full-screen ads on a massive scale is to create a sponsorship campaign across a number of very large top app store ranking apps that delivers the message “This app has been brought to you by brand XYZ”. The concept here is about a native approach to mobile advertising, whereby the creative blends both the look and feel of the app and aspects of the brand.  This approach has been tried and tested across other media for years and proves that less intrusive advertising can generate brand recall.

Furthermore, the unique placement of Postitial and comparing it to the back cover of a magazine reaffirms the premium nature of the ad slot and why this ad space should get brands excited.

If you would like to find out more about how to include Postitial in your media plans for both branding and sponsorship contact us at sales@iqzone.com.